I am continually amazed by technology and its uses. A number of years ago a young woman won the NYC marathon. She literally came out of nowhere to win. She was aided by the NYC subway which transported her for part of her journey. The race organizers were so disorganized as to not notice that she was not on the entire race course.

Since then other runners have complained that their running time is miscalculated by the long wait to reach the start line. So now everyone receives a sensor. This automatically times your start and finish to officially be more accurate. You can’t take a bus, cab, or train. They measure the split times too. So why not photograph as you go. It’s a great way to make money for the event. It’s not perfect but it is a whole lot better than any one being there to photograph on the race course. It’s a long race and you simply can’t run up on the Westside Highway to start taking photos. Swim, bike and run, there were cameras set up to catch the participants along the route. That’s David. He trained for months and did pretty well in his first ever event. He never competed in high school or college in any organized team/individual event so far as I know. Now he and his sister have been competitors in NYC organized events. Congratulations Dave! 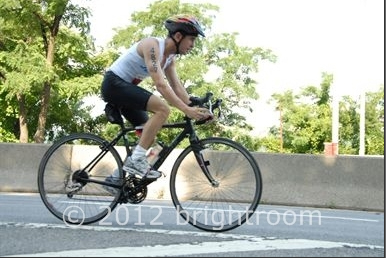 Wikipedia: In photography, the Sunny 16 rule (also known as the Sunny f/16 rule) is a method of estimating correct daylight exposures without a light meter. Apart from the obvious advantage of independence from a light meter, the Sunny 16 rule can also aid in achieving correct exposure of difficult subjects. As the rule is based on incident light, rather than reflected light as with most camera light meters, very bright or very dark subjects are compensated for. The rule serves as a mnemonic for the camera settings obtained on a sunny day using the exposure value (EV) system.

The basic rule is, “On a sunny day set aperture to f/16 and shutter speed to the [reciprocal of the] ISO film speed [or ISO setting] for a subject in direct sunlight.”[1] For example:

Cousin David illustrates the “Sunny 16” in this image. It works! The sky is a little blown out. But there is a serviceable image. Back in the day when ISO was fixed to the film in the camera, this rule was in the Kodak paper enclosed in every box of film and on the box itself. Many cameras did not have a meter. Many more did not have changeable settings. Where you could set shutter speed and f-stop, this rule applied and got something on the negative, which could be printed. Of course this was a rough approximation. However anything that could be printed was a plus. Most amateur photographers at the time were largely unsuccessful so that this rule helped.

For a while, I will post to all three of my blogs regarding Saudi Arabia. My secret/insanity/mid life crisis will be now be revealed. I realize that I won’t live past one hundred. What fun would it be to say that I had lived in one place all my life? After letting you all know of my initial cultural shock and adjustment, I will continue the Saudi adventure on the Imaged Event blog, for which my posting has been fairly quiet. Like a diary I will provide observations of life and living in a foreign country. I am sympathetic but not so good on the empathetic side. My  experience is giving me a new perspective as someone who is no longer language (English) proficient in learning how to adjust to different customs, food, and culture. I arrived on June 3, 2012, but have delayed posting until I have been in country long enough to get my bearings. My time zones remain completely discombobulated. To repeat, Photo Back Story will chronicle my photographic experience and Imaged Event will transition to my Suadi experience.

Today’s image is of the King. He is old and in poor health according to sources. His heirs apparent have both died and the line of succession is being determined. This seemed like a good place to start. Long live the king.

Palermo, Buenos Aires. Here’s a great tip that I discovered. My Canon G11 was getting great, I mean really great, sunsets. All you do is set it to the automatic ‘dummy’ setting for sunsets. Brilliant, eat your heart out sunsets. Get it? So I’m puzzled by the Nikon D200 images. It gave me washed out images of the same scene.

Then the ‘aha!!!’ moment occurred. I was messing in Photoshop (sadly, it used to be the darkroom) and discovered that the Canon processing is mostly just an increase in the saturation. Try it. Go to the ‘hue/saturation’ in color adjustments and dial up the saturation. Voila! So I don’t worry that my Nikon isn’t up to the task anymore. The later Canon G12 model leaves out a ‘sunset’ mode setting, which disappointed my daughter. However, there is a ‘saturation’ mode setting. For the simple amateurs who would use these modes, ‘sunset’ is a more straightforward term. May all your sunsets be ‘saturated.’

The critical moment – the critical shot. I took this picture in London many years (decades) ago. Julia was right. There is a difference between slide film and digital capture. I won’t be going back to film anytime soon, but I can now see her point. I haven’t looked at these slides in a long while. To illustrate, I was careful about shooting photos because in those days you really didn’t shoot freely. I took about 30 to 40 rolls for a trip of two weeks and shot much less. That’s roughly about a thousand images? Now, I shoot that many in a few hours sometimes. Anyway a pet peeve is that the motor drive won’t save you. But at the same time the critical moment is easy enough to miss. This image was taken as the third in the series. If I had only one of the first two that would have been ok and I would otherwise be happy. But the last shot, that’s a keeper. In the days of film, you would have to wait to see the image after it was developed. Now, you can cheat and look at the LCD screen. But by the time you review, the moment has passed. Anyway the point is to stick with the situation until you have the shot. And remember it’s quality not quantity. 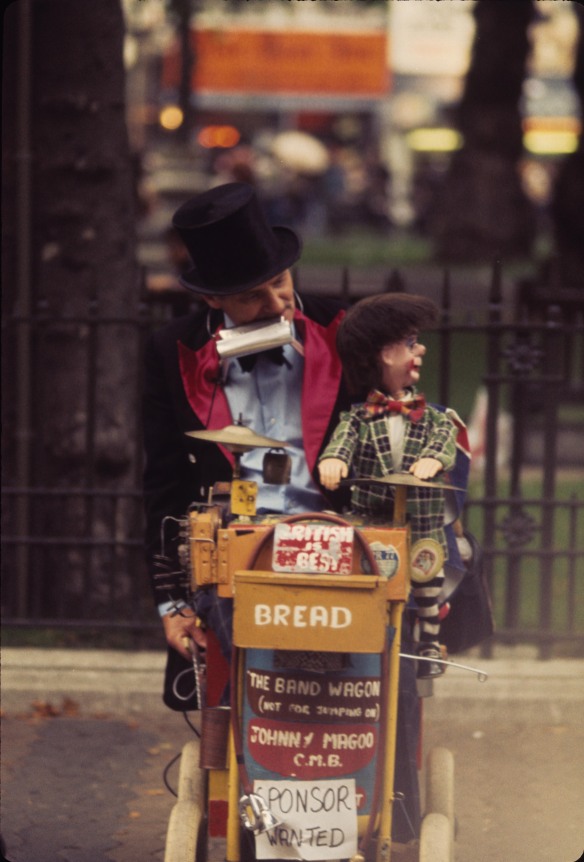 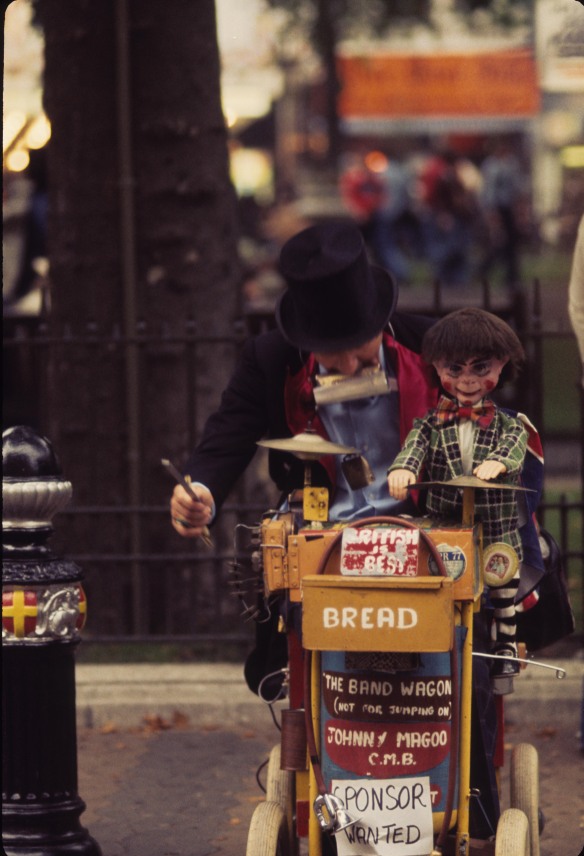 Another stacked image of a succulent, this is perfectly exposed and softly lit. The composition is fine. The background is not distracting. The center of the flower is at the intersecting ‘rule of thirds.’ This is a fine image.

This is another technical masterpiece by cousin David. He stacked his images and used flash. The result is great. No criticism here. I might add that the short duration of the flash would help with any motion of the subject. All in all it’s a pretty good effort to get the exposure and account for the motion of the subject. It’s very good software to accomplish this final image. 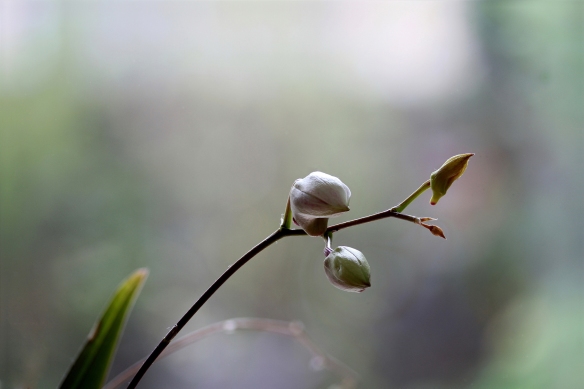 Cousin David wrote, “I tried focus stacking yesterday.  Lens was 60 mm set at F2.8 to minimize depth-of-field.  According to an online calculator, DOF = ~2 mm.  Software was CZM and result came out a bit artificial, probably because I was overzealous and had a bigger than necessary stack of photos (1 photo per mm forward).  Barcode looking strips on the left and top are artifacts from stacking.  Since I moved a total of 10 cm forward, I find this freeware rather remarkable.  I should have taken a reference shot at F16 (2 stops faster than F32?) for comparison.”  David

David, you’re beyond my technical ability now. What a nice photo! The focus on the flower is hard to appreciate till you look at the leaf on the right. With shallow depth of field the whole leaf would not be in focus. Bar code is not noticeable in the image that I see. You should try HDR (high dynamic range). For landscape and buildings, this is very interesting. Since you are so patient and are willing to do more with a tripod this would be a natural progression. I seem to recall that we talked about a good tripod. I believe that you have a solid one and should stick with it. I also saw that Barnes and Noble sold a pinhole camera book/kit. I would have sent it to you, but it uses film. And who knows what that is any more?

At first I thought this was one of my shots. But it is David (son). His image of grandpa is distorted in a different way. Grandpa’s forehead is larger and enhanced by the receding hairline. The face and mouth are smaller as they are farther from the wide angle perspective. I am certain that David loves his grandparents and did this unintentionally so that I could make these observations.

Another camera point and shoot trick is to take your own picture. You simply extend your hand and shoot. You can see David’s left shoulder extending. He was traveling with his grandmother in Europe. And they met one of his friends, who happened to be traveling in the same city. It was a random meeting, I think (you never know). Anyway back to perspective. The closer subject will be larger – David. The distortion is not too bad. It does preserve a nice memory.

Requesting reader submissions for comment. I will try to use your photos as space and time permits. Email to: comped45961@mypacks.net

Want a preview: Click on Index More: Click the links on Blogroll for sites related to my work.

© 2011 Victor Ho - Unauthorized use and/or duplication of this material without express and written permission from this blog’s author and/or owner is strictly prohibited. Excerpts and links may be used, provided that full and clear credit is given to Victor Ho and imagehappenings with appropriate and specific direction to the original content.
Loading Comments...